How the mind tricks you into feeling Anxiety

I read this article and I love how it explains anxiety, having had/have anxiety forever I just love to pick apart the brain and really see what we do to ourselves on a daily basis to keep anxiety alive.

The anxiety trick is behind most of the trouble people have with chronic anxiety. Have you struggled to overcome an anxiety disorder, only to get disappointing results, or even feel worse over time? You’re being fooled by the Anxiety Trick.  (David Carbonell, Ph.D. Anxiety Coach)

This is a terribly common occurrence, and people mistakenly blame themselves for it.

Here’s a more accurate, and helpful, way to understand this common and frustrating problem.

What is an anxiety disorder? It’s you getting tricked into feeling powerful fear in the absence of any danger.
It’s because there’s no danger that people seek help for these fears. People recognize that they’re getting afraid when they’re not in danger. If they were actually in danger, they would just protect themselves as best they could, and be better off for it.
With an anxiety disorder, people get afraid when they’re not in danger. Their struggle to protect themselves from fear leads them down a path of increasing trouble. That’s the anxiety trick.

How does this happen, that you feel fear in the absence of danger? This is the Anxiety Trick at work. 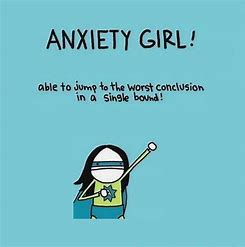 The Anxiety Trick is this: You experience Discomfort, and get fooled into treating it like Danger.

What do we do when we’re in danger? We only have three things: Fight, Flight, and Freeze. If it looks weaker than me, I’ll fight it. If it looks stronger than me, but slower, I’ll run away. And if it looks stronger and faster than me, I’ll freeze and hope it doesn’t see so good. That’s all we have for danger.
When people experience the fear of a panic attack, or a phobic encounter, or an obsessive thought, they instinctively treat it as a danger. They try to protect themselves, with some variation of Fight, Flight, or Freeze.

How People Get Tricked
People’s natural instincts to protect themselves are what lead them to get tricked. See if you recognize your responses in these examples below.
A person with Panic Disorder gets tricked into holding her breath and fleeing the store (highway, theater, or other locale), rather than shifting to Belly Breathing. and staying there until the feelings pass. What Maintains the Anxiety Trick?
You might wonder, why don’t people come to see this pattern, of repeated episodes of fear which don’t lead to the feared outcome, and gradually lose their fear?
The answer is this. They took these protective steps, and there was no catastrophe. They tend to believe that these steps “saved” them from a catastrophe. This thought makes them worry more about “the next time”. It convinces them that they are terribly vulnerable and must constantly protect themselves.

The actual reason they didn’t experience a catastrophe is that such catastrophes are typically not part of a fear or phobia. These are anxiety disorders, not catastrophe disorders. People get through the experience because the experience isn’t actually dangerous. But it’s understandably hard for people to recognize that at the time. They’re more likely to think they just had a “narrow escape”. This leads them to redouble their protective steps.
It’s the protective steps which actually maintain and strengthen the Anxiety Trick. If you think you just narrowly escaped a catastrophe because you had your cellular phone, or a water bottle; or because you went back and checked the stove seven times; or because you plugged in your iPod and distracted yourself with some music, then you’re going to continue to feel vulnerable. And you’re going to get more stuck in the habit of “protecting” yourself by these means.

This is how the problem gets embedded in your life. You think you’re helping yourself, but you’ve actually been tricked into making it worse. That’s how sneaky this Trick is.
This is why my patients so often say, “the harder I try, the worse it gets”. If the harder you try, the worse it gets, then you should take another look at the methods you’ve been using. You’ve probably been tricked into trying to protect yourself against something that isn’t dangerous, and this makes your fear worse over time.

How Can You Overcome
The Anxiety Trick?

The thing that makes fears and phobias so persistent is that virtually anything you do to oppose, escape, or distract from the anxious feelings and thoughts will be turned against you, and make the anxiety a more persistent part of your life.
This is why people notice “the harder I try, the worse it gets”. They’re putting out fires with gasoline.

If you come to see that you’ve been putting out fires with gasoline, you may not have any idea what to do next. But the first step is always the same: put down the buckets. Stop throwing gasoline on that fire.

This is where the cognitive behavioral methods of desensitization and exposure come in. They’re intended as methods by which you can practice with (not against) the symptoms, and become less sensitive to them. As you lose your fear of the symptoms, through this practice, that’s when the symptoms will fade.
All too often, people get the idea that exposure means going to a place or situation where you’re likely to get anxious, perhaps a highway or an elevator, and take a ride without getting anxious. That’s not the point! The point is to actually go there and feel the anxiety, being sure to stay there and letting the anxiety leave first.
The way to disarm the Anxiety Trick is to increasingly spend time with anxiety, to expose yourself to the thoughts and sensations, and allow them to subside over time.
What can you do to make the experience of exposure more tolerable? You can use the AWARE steps as a general guide for how to conduct yourself while doing exposure. If you want a more specific, step by step guide for overcoming panic attacks and phobias, my Panic Attacks Workbook is full of tools and techniques that will help you keep moving forward. If your problem is Generalized Anxiety Disorder, or involves a lot of worrying without regular panic attacks, The Worry Trick is a book that will help you reduce the role worry plays in your life.

Always keep in mind that exposure is practice with fear, and do nothing to oppose, avoid, or distract from the fear during exposure.

This may sound scary and yes it bloody well is, but there is other ways I have found to be effective before this stage. Reprogramming your mind with hypnosis, YouTube have some amazing hypnosis, really feel the emotions.  Look at a person you would like to become that is perhaps what you think is fearless and practice feeling the way they would feel.  Sitting in your house, visualise you as that person and really feel in your heart the strength and laser focus that they have, the posture they hold, the belief they have in themselves.

Visualisation, Incantations, heart focused breathing REPEAT REPEAT REPEAT.  Get mental strength then go on out and practice feeling strong and unstoppable and when you get knocked down, don’t let those shitty thoughts come back into your head, you know the ones I mean.  Just get back on it and don’t let anything stop you, have faith in you.  You are enough, you are love, you are infinite being and don’t let your emotions control you.