How Does Reflexology Work?

Reflexology helps release stress, which in turn helps the body heal and regenerate itself. There are several theories about how this process work. 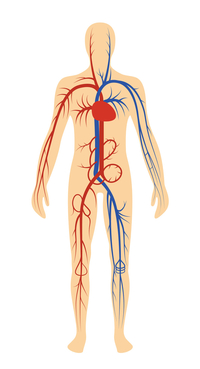 This theory builds on research done in the 1890s by Sir Henry Head and Sir Charles Sherrington, who began to show through their research that a neurological relationship exists between the skin and the internal organs, and that the whole nervous system adjusts to a stimulus.

According to the theory, the reflexologist’s application of pressure to feet, hands, or ears sends a calming message from the peripheral nerves in these extremities to the central nervous system, which in turn signals the body to adjust the tension level. This enhances overall relaxation, brings internal organs and their systems into a state of optimum functioning, and increases blood supply (which brings additional oxygen and nutrients to cells and enhances waste removal). It positively affects the circulatory, respiratory, endocrine, immune, and neuropeptide systems in the body.

Another theory that may also explain how reflexology can produce pain relief is the gate control theory, or, more recently, the neuromatrix theory of pain. This theory suggests that pain is a subjective experience created by your brain. The brain does this in response to the sensory experience of pain, but it can also work independently of sensory input and create pain in response to emotional or cognitive factors. Thus things that influence the brain, such as your mood or external factors like stress can also affect your experience of pain. According to this theory, reflexology may reduce pain by reducing stress and improving mood.

Another theory that may also explain how reflexology can produce pain relief is the gate control theory, or, more recently, the neuromatrix theory of pain. This theory suggests that pain is a subjective experience created by your brain. The brain does this in response to the sensory experience of pain, but it can also work independently of sensory input and create pain in response to emotional or cognitive factors. Thus things that influence the brain, such as your mood or external factors like stress can also affect your experience of pain. According to this theory, reflexology may reduce pain by reducing stress and improving mood.

Yet another theory holds that there is a “vital energy” in the human body. If stress is not addressed, it leads to congestion of energy, which in turn causes bodily inefficiencies, which can lead to illness. According to this theory, reflexology helps keep the energy flowing. 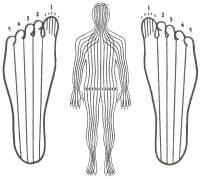 The recognition of reflexology as a specific type of treatment began with Zone Theory, in which the body is divided into 10 vertical zones. Each zone corresponds to fingers and toes all the way up to the top of the head. For example, if you are standing up with your hands on your thighs (palms facing down) the thumbs and great toe would be zone 1. On either side of the body, the index finger and second toe would be zone 2, etc.

In reflexology theory, every organ, valve, muscle, etc. that lies within a zone can be accessed via a point or area on the feet or hands. For example, working between toes 2 and 3, or fingers 2 and 3, the eye point is found. These pathways between pressure points and other parts of the body are thought to be connected via the nervous system, as described above.

More Benefits that have been found after receiving a Reflexology Treatment.

By aligning the functioning of various organ and muscle systems, reflexology can increase  metabolism and energy creation processes within the body. If you need a boost of energy or are always feeling sluggish, perhaps a reflexology session can help put some pep back in your step!

One of the most well-known and verified benefits of reflexology is an improvement  in circulation throughout the body, which means that blood and oxygen are being cycled through the body more effectively. This means more oxygen reaches vital organs, thereby optimizing their functioning and further increasing the metabolism. This also results in faster healing and re-growth of damaged cells.

As mentioned above, reflexology has been known to open neural pathways, and this sort of free-flowing neural activity results in a more relaxed state in the body. For this reason, reflexology can flood your system with relaxation, inducing a state of calmness throughout your body and mind. In this same vein, reflexology is commonly used to cure sleep disorders. Insomnia can be a very troubling condition to suffer through, but reflexology helps your body relax and get back to its normal, healthy circadian rhythms.

Reflexology has been shown to improve bladder function and reduce urinary tract issues. What this means in terms of toxicity is a more efficient system of eliminating toxins and other foreign substances, thereby protecting your body from the various diseases and health conditions that can often arise from a compromised urinary system.

The open neural pathways can benefit our central  nervous system in a variety of ways. It not only enhances the brain’s ability to handle inputs more effectively, thereby speeding up our cognitive powers, but also boosts memory.

Reflexology is primarily used by many people as a method of eliminating pain. As an analgesic treatment, reflexology can reduce the severity of a migraine and headache, simply by relieving tension in the muscles that can often result in these conditions. A headache induced by stress can also be eliminated since stress and psychological factors often manifest in the physical symptoms of a migraine.

The combination of increased nerve activity and circulation, as well as the balanced functioning of the metabolism, means that cells re-grow faster and wounds are able to heal quickly. Also, the pain-relieving qualities of reflexology mean that patients recover rapidly, and are willing to get back into routine life!