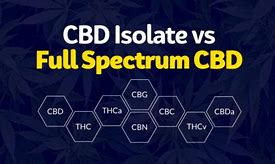 It can become very confusing when looking at what oils to buy as there is so many out there and you want to get the right one for you.  You also want to get high quality oil that has been extracted by the best method which I believe to be Co2 Extraction.

What is the difference between Full Spectrum CBD Oil vs Isolate?

This is often one of the first questions asked by those diving into the world of CBD for the first time. Once you understand the difference between these, you’ll be better equipped to make an educated decision on which CBD oil product to buy for your needs.

The two most popular types of CBD oil used today are Full Spectrum and Isolate. You may also come across products labelled as “Whole Plant” or “Pure CBD.” This article will explain the differences and similarities among these.

Full Spectrum generally refers to CBD oil products that not only contain CBD, but also contain some terpenes and other cannabinoids such as CBG, CBN and even some THC. Usually these will be in ratios that were naturally occurring and extracted from the plant and specific strain. But they are also occasionally added back into products as an isolated form to raise the potency of the product. For those that get drug tested, Full Spectrum is something to be cautious about. The THC found in full spectrum hemp products is minimal (less than 0.3%), but can still trigger positive drug tests.
With Full Spectrum CBD oil products, you have the advantage of something called the “Entourage Effect.” This is where all the cannabinoids and terpenes are working together in synergy, something that Isolate products will lack.

When seeking out Full Spectrum products, you may come across some called “Broad Spectrum” that claim to have 0% THC. It’s important to verify lab tests on these products to make sure that this is not a false claim and you’re encouraged to still exercise caution with these products if drug testing is a concern. These products have sometimes gone through additional processing to try to isolate and remove as much THC as possible while still maintaining some of the other cannabinoids and terpenes.

Isolate is typically the CBD oil product of choice for those who get drug tested or are sensitive to other cannabinoids such as THC. Products labelled as Isolate will generally be highlighted as being 99+% pure CBD. Usually, these products will have nothing but CBD in them because the CBD has literally been isolated from everything else. You can find pre-made isolate oils that typically consist of a carrier oil, such as MCT Oil, infused with the crystalline isolate powder. You can also find the “raw” crystalline powder or slabs (a form of concentrate) on its own.
When looking at isolate, it is important to verify the purity. While many are in the 99.9+% range with no identifiable amounts of THC, there are lower purity ones (such as 99.5% or lower) that may still have trace amounts that show up on the labs. This small amount is typically negligible, and is nowhere near the amount usually found in Full Spectrum products. But it’s still something to be aware of for those seeking the purest they can find.

Which is Better – Full Spectrum or Isolate?
While there is much debate on which form is better, this 2015 study (http://file.scirp.org/pdf/PP_2015021016351567.pdf) leans in favour of Full Spectrum products. There are many that believe that other cannabinoids, THC especially, are necessary to take full advantage of what cannabis has to offer. Ultimately, however, we are all different and it comes down to the individual user and their needs. If drug testing is a concern, you’re encouraged to seek out CBD isolate products  instead of Full Spectrum.